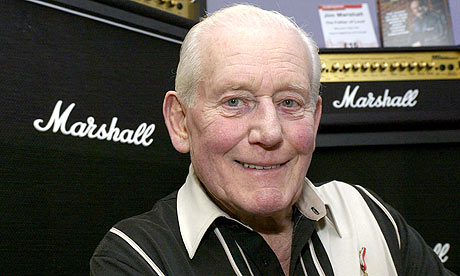 When Jim Marshall loaded a largely Fender Bassman circuit with EL-34 power tubes back in the late 1950s, he probably didn’t imagine how significant his contribution to rock n roll was about to become.

Or, when Pete Townsend asked Jim to build him some 8×12 cabinets… And then, because they were just too big and heavy, Jim cut them in half… thus creating the ubiquitous 4×12 cabinet known around the world.  Like many great creations, these ideas sprang from genius, accident and hard work combined with a keen eye and ear.

Check it out:  EL-34 tubes are like “European 6L6’s” but have more gain and drive more easily into clip (or crunch, as it became known).  Celestion speakers had been mostly used in British train stations to announce arrivals and departures.  Add ‘em all together, stack ‘em up and let the musicians do the rest… Jim was well on his way to redefining rock amplification, both visually and sonically.

I imagine he stood back and smiled, a little in awe of his trademark creation and what it could do.  I was awestruck when my band's guitarist (Lizard Slim)
bought a brand-new 100 watt full-stack from Leo's Music in Oakland around 1967."

So…   Thanks Jim and Continue Smiling Down as we honor your inventiveness and success, and offer our condolences to the entire Marshall Family.