Electra Dyne heads, Stiletto 4x12 Slants and some vintage Tremo-Verb 2x12 combos on Kim Thayil's side of the Soundgarden stage

Thirteen years later, fans of heavy rock music are being treated to a reunion of both the band and all the genre-bending music Soundgarden wrote in the decade where Alternative Rock was born. Massive sounding, successful and defining albums like Badmotorfinger, SuperUnknown and Down on the Upside were loaded with hit songs that remain the foundation on which Alternative Rock was built. On the heels of a career-spanning retrospective titled Telephantasm, the band is taking to the streets with select live dates and a recent television reunion debut.

One of the historically defining elements of the bands sound was the emergence of a new amp in 1992 called the Dual Rectifier. The extended sub-low potential of the Rectifier amps was tailor-made for the alternate and detuned guitars that also shaped the bands signature sound. The Rectifier amps went lower and sounded bigger than any modded high gain amp that had been tweaked before it. But that same low end was still tight and the distortion and harmonics were lush and heavy. While the band's sound is ultimately the people who wrote and played it, the Rectifier was an early layer in the undeniable sonic signature that is Soundgarden.

Kim's rig for the reunion blends elements of old and new in an effort to maintain the signature sound but also define the details on a new level. A Tremo-Verb 2x12 combo holds down the traditional Rectifier gain duties and even some new roles as well (the Tremo-Verbs were a favorite for Thayil in the early days). Fast forward to today and the Electra Dyne's simple interface and vintage rock grind compliment the Rectifier sound perfectly. Coupled with Stiletto 4x12 cabs instead of the Rectifier 4x12s used in earlier Soundgarden live setups, the sound overall is slightly tighter but the gain signature remains undeniably Thayil and Soundgarden.

Mesa is proud to continue it's support of such an iconic and influential band as Soundgarden. Easily one of the most influential bands of the 90s heavy rock revolution and a key player in the definition of the Rectifier sound popularized now for nearly 20 years. A tip of the hat to Thayil and Soundgarden. Good to see you back!

For more info on Soundgarden touring and to pick up a copy of their latest release Telephantasm (check out the Deluxe Version with video of live performances and more) go to www.soundgardenworld.com 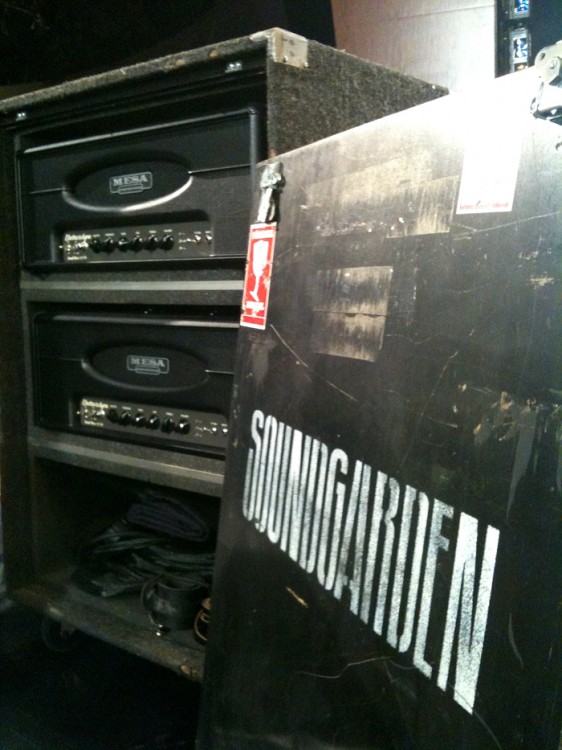 Thanks to Neil Hundt, Kim's tech for pics and details on Kim's new rig!