Fuses: What do they do, why do they blow and
what you need to know.

So your amp doesn't power up, or it sounded great then cut out and you turned around to see the lights out? Most likely the fuse blew...What's next?

There's never a good time for your beloved tube amp to not work but a blown fuse is actually a good thing if you are aware of what it's trying to tell you. In most cases a blown fuse is signaling a shorted or otherwise failed power or rectifier tube. It's important to note that Mesa amps are designed in such a way that even the most inexperienced and tube-terrified musician can change a bad tube as easily as you would change a light bulb. That said, let's first explore the role of the fuse and some basic troubleshooting concepts every tube amp owner and enthusiast should know. With the right perspective, a little knowledge and spare tubes and fuses, most fuse-related Mesa amp problems can be solved by the user in just minutes. And that blown fuse you were cursing earlier might actually start to look a lot more like the hero it really is.

The bottom line and THE most important concept to understand about the fuse in an amplifier is.... (drumroll please):

The fuse is in the amplifier to protect the amplifier's circuit from tube failure and other extreme voltage issues!

When the fuse blows, its not the fuse that's actually bad. Obviously a blown fuse will no longer allow the amp to function... and that's by design. Once failed, a blown fuse obviously needs to be replaced but the aspiring troubleshooter must be aware that something caused the fuse to blow, it didn't just go by itself. That something is almost always a bad power tube or rectifier tube. All tubes wear (like a lightbulb or guitar strings, except over a longer period) and will inevitably fail. With time the likelihood of failure increases and the same tubes that provide your favorite tones can actually pose a risk to the rest of the amp's circuitry when they fail. Understanding this concept is crucial when addressing an amp whose fuse has just blown or an amp that doesn't power up.

Let's talk about what the fuse is and does. From Wikipedia: In electronics and electrical engineering a fuse (from the Latin "fusus" meaning to melt) is a type of sacrificial overcurrent protection device. Its essential component is a metal wire or strip that melts when too much current flows, which interrupts the circuit in which it is connected.

In the case of tube amplifiers, when a tube shorts or fails it draws excess current. When the failed tube draws current beyond the value of the fuse, the wire in the fuse literally melts and cuts off the electricity to the amp. The amp is effectively shut off before more damage can occur. How do you like your fuse now? ;)

The next important concept to consider when addressing a blown fuse is knowing the three things that most commonly cause a fuse to blow:

In the case of the first two, regular tube maintenance and general awareness of your amp and its normal operation can help you avoid many failures. That said, tubes fail when THEY want to so there are a few further important considerations to be aware of before engaging in troubleshooting:

- Rarely does more than one tube fail. It's not impossible but definitely not the norm. Except in extreme cases or physical breakage, you are generally looking for JUST ONE bad tube. Whole sets of tubes do not fail.
- Preamp tubes will not cause a fuse to blow. (whew... check that off the list!) Preamp tubes are not high voltage like power or rectifier tubes and will not cause a fuse to blow.
- Feeding multiple fuses to an amp is not fixing it. Understanding that fuses don't just 'go bad', occasionally a fuse will fail even when all the tubes are perfectly fine. This is generally rare, BUT... trying more than 2 fuses without addressing your power or rectifier tubes can cause further damage to the amp.

OK... you know that preamp tubes aren't the cause of a blown fuse and you're pretty sure it wasn't a power surge so you're ready to move on to the next steps. If you're amp has rectifier tubes, the next step is to determine if the blown fuse was caused by a failed rectifier tube or a power tube. If your amp doesn't have rectifier tubes, you're already halfway there and its time to zero in on a bad power tube! Specific tube troubleshooting information can be found here for now and we'll elaborate on these steps in future posts. But, a few final and equally important fuse concepts remain.

In fact, the following fuse info below may actually be MORE important than what we've already discussed, and if the above hasn't sunk in just yet, make sure you at least understand this: 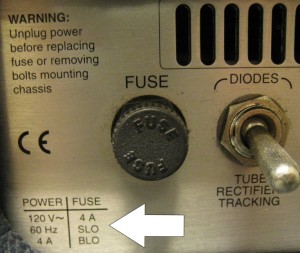 NEVER install a fuse that is rated higher than the required fuse rating printed on the back of your amp!

Likewise, NEVER install tin foil or other conductive items in place of the properly rated fuse in the fuseholder!

You can generate extreme and costly damage to your amp if fuses are bypassed or installed incorrectly. Using the wrong value fuse can lead to one of two undesirable results: a fuse that is a lower value than required by the amp will likely fail as soon as you lift the power switch to the on position regardless of the actual failures that may have caused the original fuse to blow. On the other hand, using a fuse with a higher rating than the required fuse value is almost like having no fuse at all and can cause devastating and expensive failures to other parts of the amp's circuit. Bottom line - make sure the fuse you are installing is the right one with no exceptions.

With the basics behind us, let's take a look at the preparedness side of fuses and tube troubleshooting in general. If you operate a tube amplifier, the golden rule is to always have spare tubes AND FUSES in your gig bag. Especially important - all of your spare fuses should be pre-inspected to be the correct value fuse your amp requires. It's a very good idea to physically check each fuse yourself before installing them to avoid damage from the fuse being incorrect and better to do it when not under pressure to fix the amp at a gig. 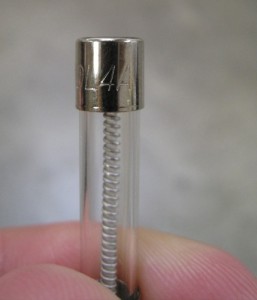 The fuse's rating is printed on the metal end of the fuse with a number followed by an 'A'.

Another very important characteristic of fuses you'll commonly see and need to identify is Slo-Blo vs. Fast-Blo. When first powering up an amp, the current draw of tubes and the voltage to the amp spikes as the power switch is lifted. This voltage spike will briefly exceed the value of the fuse and then settle below the fuses rating into a normal operating range. Fast-Blo fuses will nearly always fail on this initial power up surge which is why they are not used in Mesa amplifier circuits. Slow-Blo fuses are designed to handle a temporary surge of current beyond their rating for a short period (10-20 seconds) before ultimately failing making them perfect for withstanding the initial power up surge.

Helpful Hints and Be Prepared 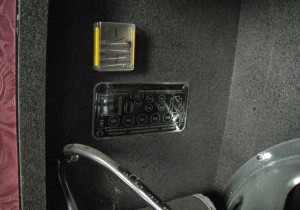 Finally - some handy hints for fuses and spares. If the fuses you purchase are packaged in a slide-lid style container, after inspecting them, consider mounting them inside the cab near the fuseholder as shown in the photo. You may be able to glue the case to the inside of the cab and if not, consider taping a few fuses to the inside of the cab with some heavy duty gaff or duct tape. It's not a bad idea to write the value of the fuse on the tape or slide case as an additional reminder when the fuse is needed.

Also helpful in a blown fuse situiation is an indication of when the power or rectifier tubes were last changed in the amp.  Make a note of what tubes were changed and when and write this info on a piece of tape or a label-maker and attach somewhere on the amp as the finishing touch to the retube job. If you've played the amp loud and a lot since you changed the power tubes (1-2 years - 15 hours a week), when the fuse blows, the age and wear on a set can be a very helpful troubleshooting tool. Especially if the amp didn't sound quite as brilliant, bright or punchy, having the date of it's last retube handy provides pieces of the puzzle, helping you get the amp back up to speed when the fuse kindly requests you take a look. ;)

For further detailed info on fuses (if this wasn't enough already), the Wikipedia link above offers much more than any guitar player should ever need to know and there's a ton of other info out there to be had if you want to go that far down the rabbit hole. When the fuse on your amp fails, it's not only saving your amp from damage beyond a bad tube that needs replacing - its often your amp's way of telling you that its time to take a look at tube maintenance in general to get your amp back up to it's original glory. Check back shortly for more detailed insights into tube troubleshooting and amplifier maintenance in future upcoming posts here on the blog and go get your spares kits in order.

And, as always, if you have further questions about your amp, blown fuses or troubleshooting, feel free to call the Mesa factory at (707) 778 6565, Monday-Thursday, 9AM-5PM Pacific Standard Time. Ask for a Product Specialist who can walk you through basic troubleshooting techniques to diagnose your amp and get you back up to speed when the fuse in your amp is trying to tell you something and learn about it all along the way.