We met up with Dominic Miller on Sting's Symphonicity Tour in Concord, CA at the Sleep Train Pavilion on June 12, 2010. Dominic greeted us with a mischievous grin on stage and immediately asked, “Did you see the match today?! You guys got lucky!” (ENG v USA in the World Cup tied at 1:1).  It was a treat to catch up and geek out with him before their sound check.

As the Royal Philharmonic Symphony filed in for sound check/rehearsal we got a tour of the stage and Dominic’s set up by his tech Rich Mazzetta.  Dominic needed to scale down his volume and stage presence for the current Symphony tour from his tried and true stereo Lone Star rig so he enlisted two Express 5:25 1x12 combos. 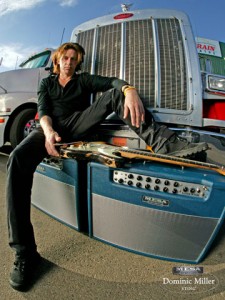 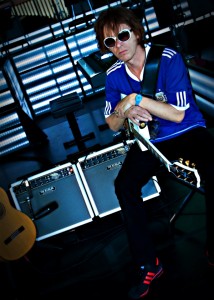 Dominic is a fan of the 5 watt setting and is using it almost exclusively for the tour.  He is not utilizing the effects loops on the amps but rather going straight into the front of them from his pedals.  His pedal board is simple in philosophy and routing.  Dominic is using the Express 5:25 clean channels for most of the set.  He utilizes the blending of some lower gain settings in channel 2 with his pedal set up for some different textures as well.  Pete Cornish designed and wired Dominic’s pedal board and little has changed in the last 10+ years.  Check out Pete’s legendary work and views about True Bypass, routing, buffering, etc. here on his site www.petecornish.co.uk. 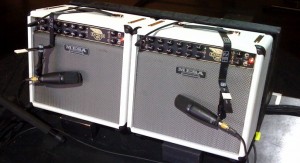 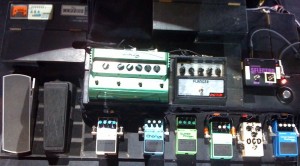 Sting arrived smiling and they immediately fired into a few tunes.  We were privileged enough to watch them work from side stage and soak in the natural acoustics of the 48 piece Symphony.  They worked out last minute details for Every Little Thing She Does is Magic, A Thousand Years, and Moon Over Bourbon Street.  The arrangements were amazing and tastefully orchestrated, yet not overdone.  It was great to hear fresh ideas for these familiar Sting and Police songs.  Sting’s voice sounded great and nearly all of the songs are in the original keys!  He would look to Dominic during these rehearsal moments for advice and confirmation.  It was great to witness this exchange and see the deep working relationship these two have had for the last 20 years.

Though the musicians cleaned up nicely for show time, the casual and fun atmosphere was still present throughout the show as it was during sound check.  Dominic was front and center playing elaborate textures and rhythms with his white Les Paul and some great parts with the nylon string.  This was not a stuffy symphony concert!  With 30 prepared songs to choose from and 3 hours of music, the show is spectacular and paced well.  Be sure to catch it as it comes through.  www.sting.com 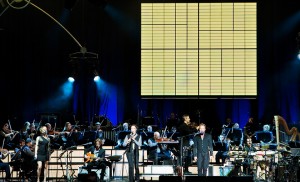 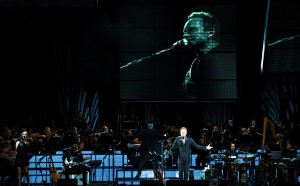 We are excited to be a part of the sound and process with this unique symphony tour!

Special thanks to Richie Mazzetta, Dominic Miller, and the crew for all of your support.