Mark Morton, Willie Adler, and John Campbell have been Mesa/Boogie enthusiasts for years before their current distinction as legends of metal.  The cornerstone of Lamb of God’s live and recorded guitar sound has been Mark IVs and Traditional Straight 4x12 with other Mesa amps blended into the mix as new products were introduced. Mark used Triple Rectifiers between 2007-2008 while Willie employed a Roadster head in his rig for the Sacrament tour cycle. The Stiletto Deuce was also utilized in the tracking of 2007's Sacrament.

Mark and Willie are in a group of notable heavy rock guitar players like John Petrucci (Dream Theater), Kirk Hammett & James Hetfield (Metallica), and Pete Loeffler (Chevelle) who have found Mark Series amps to be their sonic home base. We hold these artists in high regard as world-class experts in the Mark Series which contributed to the legacy of the Mark IV. As a part of this elite group Mesa has trusted Mark and Willie with suggestions and ultimately, the final approval of the Mark V. Top secret meetings were held in back stage rooms on Metallica’s Death Magnetic tour with Mark V prototypes. The comparisons between the Mark V protos and the band's Mark IVs generated valuable insight that drove the design process to new heights. The band's dedication to the Mark Series heritage along with Mesa's diligence in design has paid off with the ultimate seal of approval from Mark and Willie - Mark Vs have become the core of their current rigs. The first batch of Mark Vs was shipped in time for Lamb of God's critically acclaimed 2009 release Wrath and touring cycle.

Lamb of God continue to set the bar with each release and performance. They deliver first-class musicianship and technique that is reminiscent of the greats before them but with a style all their own. Watching the band steadily rise to their current level of success and essentially taking over the throne of the American metal scene has been a pleasure for all of us at Mesa/Boogie. The band and crew have become an integral part of the Mesa family and we look forward to many more years of successful collaboration.

We recently caught up with Mark Morton and Willie Adler on the 2010 Mayhem Festival and are proud to bring you some video of them with their Mark Vs.  Come hang on the tour bus with us for some of your favorite Lamb of God riffs and tones! 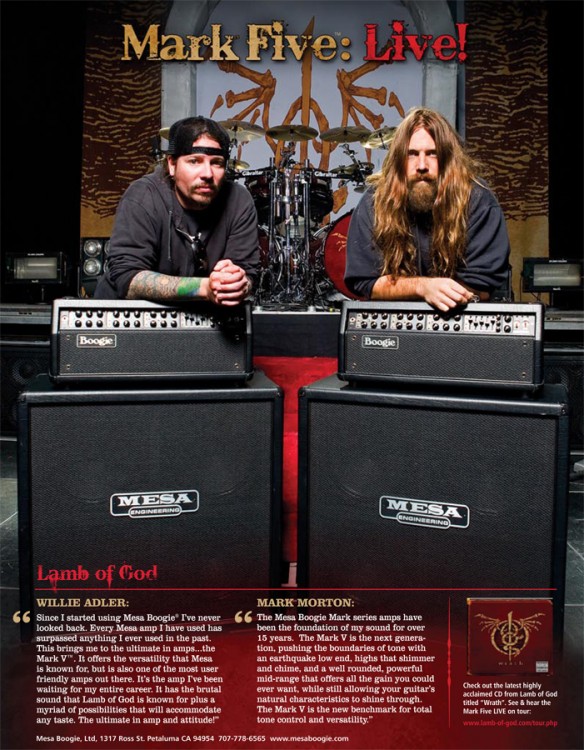 Other Mesa/Boogie artists on the Mayhem tour include: